The mural was completed in July and there was a dedication ceremony on August 20, 2019.
Murals are quite challenging to photograph well due to their sheer size. You should really go see this in person to fully appreciate it.
It is on the backside of Billy's Bar and Grill, above their parking spaces, in downtown Aberdeen, Washington. The street address for Billy's is 322 E Heron St, Aberdeen, WA 98520. 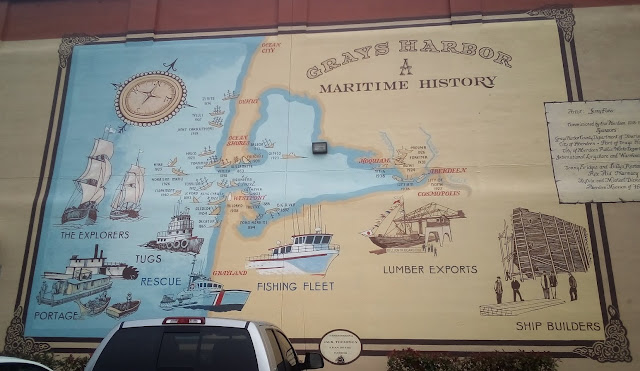 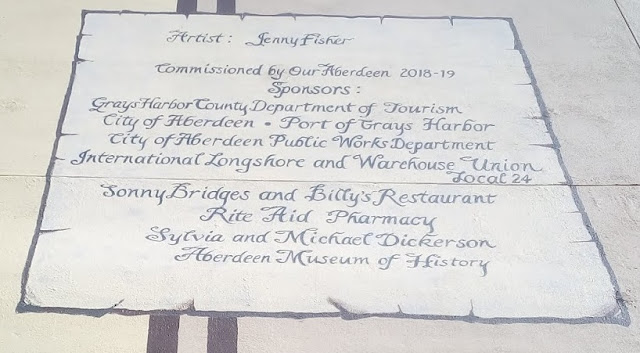 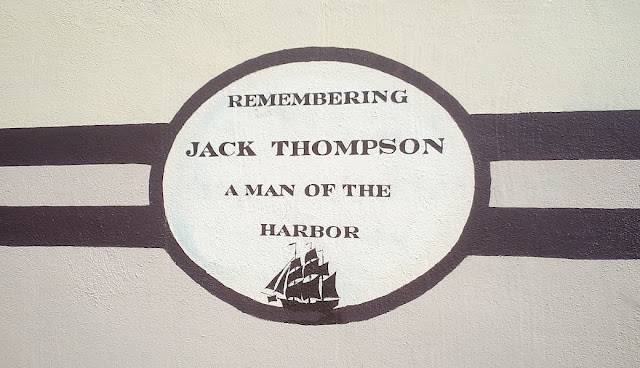 The mural was dedicated to Jack Thompson, a long-time pillar of the community, who was a Port Commissioner and a Board Member for Our Aberdeen at the time of his death. 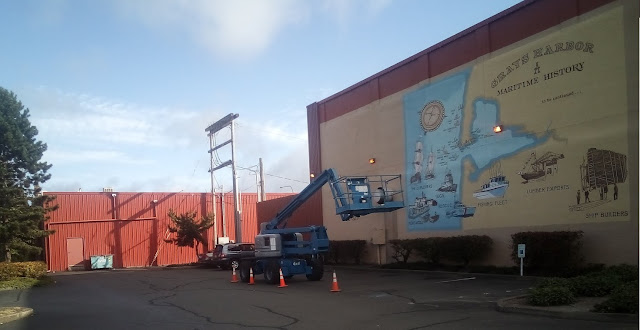 Work In Progress
Artist's Statement:
The idea for the Grays Harbor Maritime mural coalesced from two things: my experience and interest in maps and a historical map of the known shipwrecks on the Harbor, loaned to me by the Aberdeen Museum of History.
Before retiring in 2005, I spent a career in civil engineering. I began that career in 1973 when maps, plans and engineering details were all done on a drafting board by hand. As you can probably guess, I took to that meticulous handwork. My field work also involved measuring land and making detailed record drawings of those measurements.
About the time I was envisioning creating a mural depicting Grays Harbor, I was shown a map of the shipwrecks on the Harbor that occurred between 1865, with the wreck of the Decatur off the coast north of Grayland, and 1952, with the wreck of the Yorkmar off of Point Brown. This map excited me; it gave me a focus for the mural.
As I began sketches for the future Harbor map, it occurred to me to give the mural a second focus: the rich and vibrant history of the many Harbor shipping and boating concerns, the story of the Harbor. Once that second theme came into play, it was a matter of having almost too much subject matter for the mural. Besides the shipwrecks I have depicted, I included samples of the explorer ships that brought a growing and diverse community to the harbor; the porters that moved people, goods and supplies before the roads were constructed; the tugs, the worker bees of the harbor; the ship builders and lumber merchant ships; and the fishing fleet that has fed the people of the Harbor.
With so much to depict, it becomes almost a design problem. There is always a chance of offending people with the things I have left out. You notice the almost awkward title “Grays Harbor - A Maritime History”. The “A” in that title protects me from the hubris of appearing as though I got it all and I got it right.
-- Jenny Fisher, September 19, 2019
Location: 322 E Heron St, Aberdeen, WA 98520, USA